From the idea to the implementation 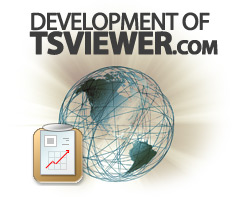 This Project exists since September 2004 and was only meant for clan intern purposes of the HFD Americas Army Squad. At Januar 2005 ginger|HFD wanted the project to grow and to publish it. The german Americas Army scene was the first area where it was published. It was very succesfull and got about approx. 70 clans in his list.

At April 2005 ScreamingLord|HFD got the code almost perfect. The Project could now be published to a wide Audience.

In May 2005 ginger|HFD built more further Feaures like the "Iframe" function which allowed you to use the TSViewer on your own homepage or e.g. in June 2005 the inquiry of all TS servers and entry into the data base, now it was also possible to search for certain persons.

Since that iam constantly working on the project. New functions are added and existing functions are improved to offer you the best TSViewer experience you can imagine.